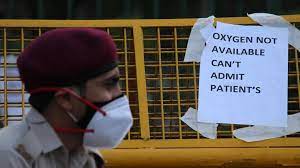 During 2020 and early 2021, the US was one of the leading countries with the most cases worldwide while India wasn’t struggling as much. However, recent news shows that India is experiencing a major outbreak of recent coronavirus cases.

This is actually the second wave of covid-19 cases in India. The first wave, while not that major, took place during late September and early October of 2020. The wave peaked at 100k cases per day during the above stated time period and quickly fell again to what it was before of 15k cases. However, during April of 2021, India saw a massive spike in Covid-19 cases going from 15k cases per day to over 350k cases per day in less than a month. Hospitals in India’s capital New Delhi have reported losing oxygen which is a great setback in terms of curing people. The reason they are low on oxygen is because the city doesn’t produce oxygen on its own. Instead, it relies on resources supplied by the central government.

However, other nations such as the US and the UK have offered to help India get the virus under control. Because of the shortage of oxygen, the UK is sending600 pieces of medical equipment to India, including oxygen concentrators and ventilators, the government announced Sunday. The US has considered sending vaccines to India although no timetables were given. Dr. Anthony Fauci, director of the National Institute of Allergy and Infectious Diseases, said sending excess vaccines to India was “on the table”. He also stated “That’s the reason why we and other rich countries have to exert what I think is a moral responsibility to help the rest of the world get this under control,” Fauci said. “A year from now we’ll be in really much better shape than we are now, but there’ll be other countries that won’t be. The quicker we get the rest of the world protected, the more secure will our protection be.”

Kevin Kang is an 11th grader at Cupertino High School. Aside from playing games, his favorite hobbies are hanging out with friends and drawing. View all posts by Kevin Kang